Past and present days

In 1913, Josef Vitoul bought a large landed site including the base of raw materials and started building Hoffman fourteen-chamber kiln (which is constructed in a circle) for lime production. The kiln is solemnly put into operation in March 1914 and the history of the limestone quarry starts.

The railway is completed and after WWI another circular kiln and a narrow-gauge railway for connection with the quarry are built. In 1926, there are 50 workers employed in the quarry. In next three years, a ball mill allowing milling lime and production of lime fertilisers gets built. In 1937, the quarry starts to produce plaster and becomes well-known in the whole Moravia because of its products for various industry sectors. The management of the company passes to the owner’s son - Ladislav Vitoul.

After WWII in February 1948, the quarry is nationalized and in 1950 it becomes the part of state-owned company Hranické cementárny a vápenky. Following development of the quarry is focused on improvement of raw material exploitation and milling on LÖSCHE LM 10 mills. Until 1965 there is two of them. Production of lime gets reduced and in 1969 it is completely abandoned. In 1976, another mill (LM 12 type) is put into operation and the fact that the enterprise gets extended by crushing plant, screening plant and five-chamber hose filters on mills causes its turn from a quarry into a lime grinding plant. Micronized limestone made in Měrotín becomes demanded in agriculture, rubber industry, mines and paper mills.

In following years, the number of employees reached 120 and the production was about 80 thousand tons a year. In 1980s, logging and hauling machinery is modernized, a control centre with automatic production control and silo of large capacity for stocking and storage of produced material are built. 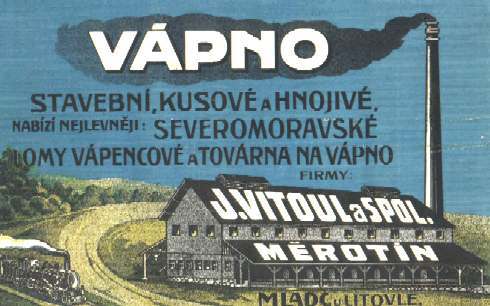 In 1991, the enterprise was given back to its former owners, i. e. newly-founded private company Vitoul v. o. s., thanks to law of restitution. Early in 1992, the management of the company passes to the next generation of the family - Ing. Ladislav Vitoul.

With respect to less demand on the market (especially in agriculture and mines), the number of employees is reduced and the production is about 65 thousand tons a year. New outlets are possible to find mainly at companies repairing roads and highways. The financial and material conditions of employees grow. In 1994, the company is transformed to Vápanka Vitoul s. r. o. and property rights are finally resolved. The production of micronized limestone grows again. The limestone produced according to ČSN 72 1220 and 72 1217, types 7-13 with use in agriculture, rubber and plastics technologies, building industry and desulphurization programme.

In following years, the number of employees is stabilized at 55 and the production until 1999 is about 90 thousand tons. All of us are working hard on implementing a new technology which will allow uncompromising disintegration of individual fractions of micronized limestone. A new hall is built and the padding device for large-capacity road tankers is modified.

The extraction has expanded since 2000 which allows to satisfy all the customers and to increase production up to 100 thousand tons a year, while keeping all the ecological and protective measures.

In 2005, an interplant lab is being reconstructed and modernized and in August of the same year, the company acquires ISO 9001 and ISO 14001 certificates.

Since the beginning of 2007, the company has focused its spare production capacity to the field of eco-agriculture, mainly for feed and it acquires certificate “KEZ doporučuje” for environment-friendly production.

In 2008, a modern sewage treatment plant is put into permanent operation.

In next years, the modernization of machinery and devices used for extraction in the quarry took place. The company added new Tatra-815, tractor Zetor to its equipment and three mining loaders went through reconstruction.

On 19th of March 1913, the company celebrated 100 years anniversary since its foundation and it has begun a new phase of its operating on Czech market in the field of ultra-fine grained limestone production.

For exemplary fulfilment of safety standards and faultless keeping of standardized quality of production in 2012, the company received “ZLATÝ PERMON” award from the Minister of Industry and Trade and the Chairman of the Czech Mining Office.

For extraordinary results in company management and reaching excellent results in mining and raw material processing, the director and the quarry were awarded by “THE MEDAL OF GEORGE AGRICOLA”.

Our company was awarded with “ZLATÝ PERMON” once again in 2013 by the Minister of Industry and Trade and the Chairman of Czech Mining Office for keeping a workplace safe and keeping quality of production.

An audit was performed and the company acquired GMP + B2 certificate which has been determining the process of limestone production for feed since the 2nd of December 2014.

In February 2015, the company earned internationally recognized Top Rating® as a long-term stable, trustworthy and solvent company. The evaluation of the risk factor was executed using Dun & Bradstreed methodology by D&B Česká a Slovenská republika, s. r. o. and is searchable in D&B database.

On the 18th of May 2015, the company was awarded with “ZLATÝ PERMON” for keeping a workplace safe and keeping quality of production for the third time in a row and gained “ZLATÝ PERMON” into permanent ownership.

On the 10th of September 2015, the company was placed in the narrow selection among the best seven producers without mentioning the order in The Best Building Material Producer of 2014 competition and got Special Jury Prize.

The company was awarded with a prestigious appraisal Czech 100 Best, attended an international conference “Key Factors of Succes” and received a diploma for “Dynamic growth and stability” in the Spanish Hall of Prague Castle.

Our company was enlisted amongst TOP100 in the Czech republic and was awarded a diploma in a category "Transport and construction". This important award was taken up by Ing. Ladislav Vitoul, the company director from hands of the Police chief genmjr. Mgr. Bc Tomáš Tuhý.

At the turn of 2019 and in the first quarter of 2020, the company modernized production with the help of subsidies from European funds. It acquired a mobile sorting and crushing line of the Powerscreen brand and new mining machines ensuring its serviceability. Liebherr excavator and loader and Tatra Phoenix T158 truck for transporting crushed material. A space was allocated in the plant - a material warehouse for subsequent processing. The aim of this project was to reduce energy intensity and from an environmental point of view there is also a reduction in noise and dust in the air.